Copy and paste across apple devices with universal clipboard

Universal Clipboard is one of the latest Continuity features available on Apple Devices.

Before Universal Clipboard Apple previously released Handoff as a Continuity feature for starting a document within an app on one Apple device and then continuing that document using the same app on another Apple device. I blogged about this feature on its’ release within the first part of my ‘OS X Yosemite hidden feature series’ back in 2014.

What is Universal Clipboard?

Universal Clipboard expands on the Handoff feature by offering the ability to copy content from any app on an Apple device into that device’s clipboard, send that clipboard data into the clipboard of another Apple device, then allowing you to paste that content into any app on that second Apple device. In other words, you can now sync your ‘copy and paste’ data between Apple devices!
No more having to email yourself information to get it onto another device, sync content to the cloud and pull it back down again, or using Handoff to transfer the document from one device to another and then copying out of that document into a document on a different app.
Universal Clipboard works between two Apple Devices. That can be a two Macs, two iOS devices or one of each platform. Universal Clipboard is designed to copy and paste any text, photo or video content between two Apple devices’ clipboards. 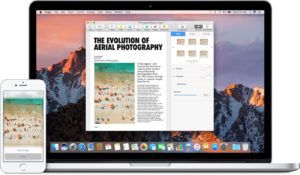 How does it work?

I’d love to say ‘It’s Magic’! But alas, that isn’t the case!
This feature works only on Apple devices running macOS Sierra (version 10.12.0) or later and iOS 10.0 or later.
You will also require any two of the following devices :

(Where i have mentioned ‘or later’, the product listed may currently be the latest product in that family at the time of writing, but listing ‘or later’ will safeguard my blog from any later releases in that product family!)
Once you have any 2 of the devices listed above running the correct OS versions, the initial setup is similar as that for other Continuity features :

I shall assume from the above steps that everyone is happy signing into iCloud and enabling Bluetooth and Wi-Fi. So i’ll start at the 4th step! 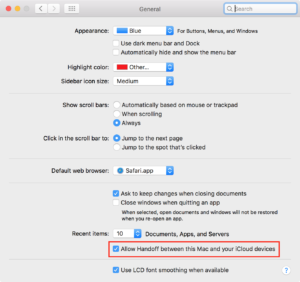 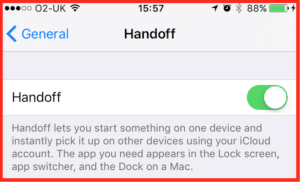 Make sure your devices are near each other. Universal Clipboard is proximity-dependent (due to Bluetooth discovery. No more than 10 metres!)
Best practice would be to therefore keep both your devices on your desk whilst doing this. The nearer the better!

Copy your text, photo, or video on one device within any app.
So for this demo i will create a new document with text in TextEdit on my Mac :

I then simply selected to copy this text to my Macs’ clipboard :

Paste your text, photo, or video on your other device within any app.
For this demo i chose to paste the content into a new note in the Notes app on my iPhone :

There was then a couple of seconds delay as my iPhone received the clipboard content from my Mac, notice the ‘Paste’ action is greyed out :

Voilà! My Mac clipboard content that was copied from TextEdit, has been pasted into a new note in the Notes app on my iPhone : 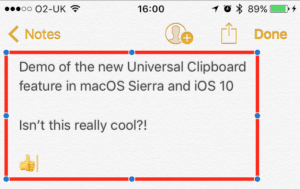 What is happening behind the scenes for Universal Clipboard to work?
What actually happens when you select to copy an item, is that the device then advertises over Bluetooth that it has something in its’ clipboard. Unlike Handoff, there is actually no visual indicator that anything has actually happened apart from you selecting ‘copy’. You have to trust in the technology! On your second device when you select ‘paste’, there may be a slight pause as your second device requests the contents of the first devices’ clipboard and the first device sends this over to the second devices’ clipboard.
That’s all there is to it!

As all communication is local, (none of your data is sent to Apple), you must be signed into the same iCloud account on both devices and have Bluetooth and Wi-Fi enabled. (You do NOT require an active Internet connection, just Wi-Fi enabled).
Therefore, the classic ‘sign out and sign back in’ technique is applicable here if this feature is not working. On both devices sign out of your iCloud account and then sign back in again. Ensure both Bluetooth and Wi-Fi are enabled. Again, try turning these off and then back on again. Or enable Airplane Mode on your iOS device and then turn Airplane Mode back off. Make sure your two devices are close to each other too. You could always try copying and pasting again. The clipboard will eventually clear itself and therefore if you are not quick enough, the copy content will not be available to paste.
What if you want to disable Universal Clipboard? There doesn’t seem to be a way to turn off just this feature alone. However, you could disable all Handoff features in General preferences.

I hope you have found this blog useful and look out for other iOS new features, tips and tricks on our Blog.
If you would like to learn more about macOS, iOS or just the Mac in general, then take a look at our collection of introductory training courses and iOS Training courses.
We also have a l