With OS X El Capitan, comes a complete redesign of Disk Utility, which will most likely bring with it, the usual level of moans, and groans when anything we often use changes.
The new layout is in essence no different to the previous version. We still have the sidebar to show us the Disk Layout for connected drives alongside the main window. However, the information for S.M.A.R.T (Status and Partition/Volume Formats, etc.) now shows in the main window when selected, rather than the footer, offering a more focused view.

The new default toolbar consists of what used to be the main window tabs that we’re used to seeing, like First Aid, Partition and Erase alongside the old toolbar options for Info and Mount.

For those that used Disk Utility to create and restore Disk Images, that functionality is still available – by either editing the toolbar or selecting the options from the File and Edit menus.
Now for some changes that you may need to get used to!
Firstly, the Partition tab has become a pie chart. This may not be anything major but from my limited use I did find it slightly more difficult to drag the slider to a specified partition size. This became trickier at around the 15% mark of my drives capacity due to the figure disappearing. You have to either guess or keep moving it. Also, if you want to change the size of the new drive, then it can decide to add another partition rather than just making the original larger. (As displayed below)

Apple has simplified the First Aid option by removing the “Verify” and “Repair” buttons from “First Aid” and have left it with a single option. This may be confusing for some as it seems that your booted partition could be repaired, but you will still need to boot to the recovery partition or another partition to achieve this. 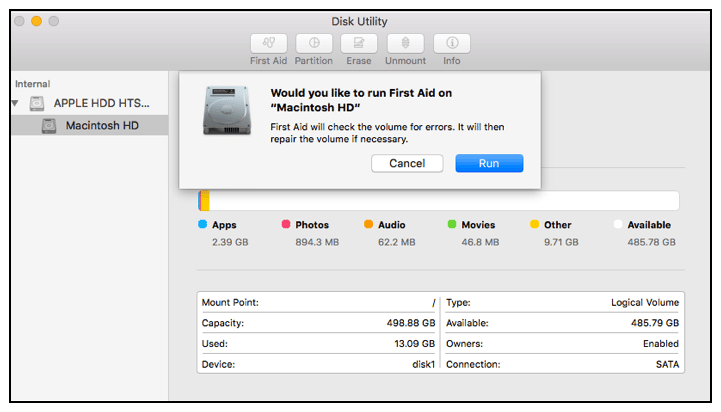 System Permission repair has been removed. However, while some may complain about its removal, this feature has been made redundant. Due to the introduction of System Integrity Protection in El Capitan, the system permissions are now maintained by software updates and the system installer. Consequently, System Permission repairs are not required, and the feature doesn’t even have a command line option anymore as it’s also been removed.
Other than the repair permissions functionality, the rest of the command line diskutil functionality is still the same, including the option to create RAID sets even though it’s been removed from the Disk Utility application.
Overall, all of the changes made have been a positive step and are in keeping with Apple’s ethos of creating intuitive, simple to use and maintain Operating Systems.